Work to build two junctions at the site of a new village at Top Wighay Farm near Linby in Nottinghamshire has recently got underway, with our team commissioned to deliver the essential highways works as a strategic partner of principal contractor, Balfour Beatty.

The two junctions provide access into a planned new village, which is a flagship project for Nottinghamshire County Council. Arc Partnership have been commissioned by the Council to deliver the project and are working with Balfour Beatty, Scape Group and Via East Midlands to achieve this. 805 new homes will occupy the 40 hectare site together with a primary school, shops, playing fields and energy-efficient offices.

The project has been championed by the leader of Nottinghamshire County Council, Councillor Kay Cutts, and is expected to boost the local economy by more than £870m over a ten year period and create 1,000 jobs.

The civil engineering works to create the new junctions and associated highway infrastructure are being led by Balfour Beatty in partnership with our team. Plans set out a completion date of Spring 2021 for highways works which include the expansion of a roundabout on the A611/Annesley Road, a new signal controlled junction and a three metre wide footpath and cycle lane running to the north of Hucknall and west of Linby.

Current improvements are being funded through a £5.8 million grant from Homes England alongside a £3m investment by D2N2 – with additional funding provided by Nottinghamshire County Council.

Our Construction Director Adrian Cronin is delighted to see this landmark project break ground and welcomes the support from the County Council and all associated partners to significantly boost the local economy.

“Given the current climate, the timing of this project is fantastic because it shows that despite everything else, significant investment is still being made to improve the local economy, create jobs and improve local infrastructure,”

“We’re delighted to be partnering with Balfour Beatty on the completion of essential highways works having worked together on numerous other projects previously. Our strong collaborative approach will ensure successful delivery as part of this transformational scheme for Nottinghamshire and provide highways and infrastructure built to accommodate this exciting new village location,”

As well as delivering required highways works and infrastructure, the teams at McCann and Balfour Beatty are ensuring that the existing landscape is retained where possible alongside attractive green infrastructure that encourages biodiversity.

“The Top Wighay Farm development is one of the most ambitious projects ever undertaken by the County Council. It will boost the county’s economic growth and will regenerate an area at the heart of our county, benefitting not only the current population but many generations to come.

“It has been a challenging time for the industry with many jobs coming under threat, so I’m delighted that this development is creating work for this Nottinghamshire company as well as other SMEs in the supply chain.” 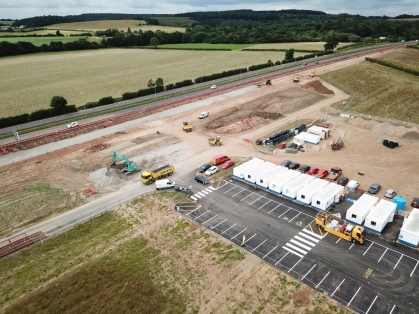