Skip to content
Media > Projects > We are lighting the way on energy-efficiency, with the completion of a £1.1m Highways England M62 LED Lighting contract

We are lighting the way on energy-efficiency, with the completion of a £1.1m Highways England M62 LED Lighting contract

We have successfully built upon our impressive LED lighting portfolio by completing lighting upgrades between J22-25 of the M62.

The project, coordinated by Highways England’s term contractor A-one+, was completed in a 9-week period between January and March 2017 – covering a 19km stretch of the M62 between J22 at Saddleworth Moor, and Kirklees Viaduct to the west of Junction 25.

As part of the lighting upgrade on one of the UK’s busiest motorways, 1,224 existing high pressure sodium lanterns were replaced with new Ampera Maxi LED lighting units and 12 existing street lighting feeder pillars were replaced.

The project also included the installation of a new Central Management System (CMS) – with remote manipulation of operational burn hours, control over the timing of dimmed lighting when there is minimal traffic, and fault monitoring and energy consumption tracking systems. The reporting and control mechanisms can also be operated on a light-by-light basis or across the entire network.

Our Managing Director, John McCann, highlights the importance of a shift towards energy efficient LED street lighting as a greener method of illuminating the UK’s roads – “Both air and light pollution are issues that continue to be addressed because the need for energy-efficient LED lighting on UK roads is becoming more important than ever before”.

One of the major benefits of the newly-installed LED lights is that they require minimal routine maintenance – cutting down on man hours required in order to keep them operational.

These significant upgrades along the M62 will generate a 53% energy saving – reducing annual energy consumption from 2,203,807 kWhrs to 1,041,658 kWhrs. Ultimately, the energy saving per year is enough to run every household in a town housing 20,000 people, for a fortnight. In monetary value, the saving equates to £127,840 per year and over the 25 year lifespan LED lights, the total saving comes to nearly £3.2m. A total of 612 tonnes of carbon emissions will be saved every year – the same carbon generated by 389,000 loads of domestic washing.

“The benefits of our work on the M62 will be seen far into the future, offering a more sustainable approach to lighting the way for road users. We are proud to be at the forefront of the shift to energy-efficient LED lighting in the UK and we will hopefully continue to roll out such projects in the years to come” added John. 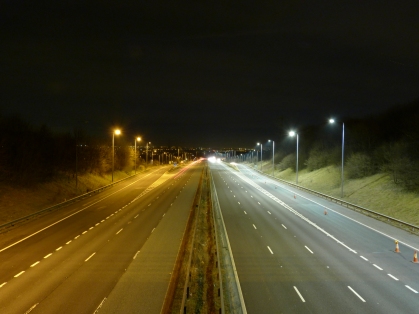