This was much more than a state of the art light and sound system housed in six giant arches stretching the length Birley Street, it formed an integral part of the ambitious regeneration scheme for Blackpool’s town centre; and as such called on McCann to demonstrate not only their well known skills as a lighting contractor but their significant in-house civil engineering capability.

Each nine metre arch had a span of some eighteen metres and was supported on a piled foundation with an associated reinforced concrete cap. The scheme also included 2500 metres of ducting carrying 24000 metres of power and 5000 metres of signal cable controlling the lighting.

Significant carriageway works formed part of the project delivery with over 3000 tonnes of original road construction removed and the existing carriageways and pavements repaved with 250,000 granite blocks laid on a bituminous basecourse. 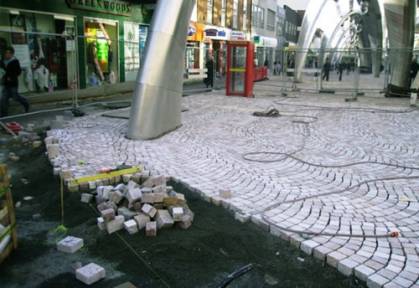