Our team recently completed substantial works as part of Highways England’s smart motorway project between junctions 2-4 of the M6 in the West Midlands.

Improvement works on the 11.8 mile stretch of the M6 started in 2018 with our team working alongside Balfour Beatty and Vinci (BBVJV) to deliver major upgrades as part of a wider nationwide switch to smart motorway infrastructure.

The M6 falls within Highways England’s Area 9 Asset Support Contract, with the stretch between junctions 2 and 4 joining Coventry to Coleshill and while linking up with another major route – the M42.

Motorists were experiencing frequent delays between these two busy junctions due to the volume of traffic on the roads and the project was identified as major works by Highways England in order to ease congestion by smoothing the flow of traffic and improving journey times. The project also aimed to maximise road capacity to support economic growth within the region and introduce technology to allow Highways England to activate warning signs to alert motorists to traffic jams and hazards.

Driver experience and consistency was upgraded on the northbound carriageway by retaining 3 lanes and a hard shoulder from junction 4 to junction 10a alongside the installation of new electronic information signs, signals and CCTV cameras to vary speed limits and manage traffic flow and incidents.

Nine emergency areas were also introduced as well as a concrete barrier to provide improved driver safety, new noise barriers in built up areas and low noise surfacing to help combat the increase in background noise generated by motorway traffic.

We were brought on board by BBVJV to install all necessary motorway communications, street lighting, traffic signals and associated infrastructure on this region-defining project. This is not the first major smart motorway upgrade that the team has been commissioned to help deliver, with other notable recent projects including commencement of works on the M27 in Hampshire between Portsmouth and Southampton, as well as major improvements between junctions 23a and 25 of the M1 in the East Midlands.

Following the recent successful completion of the project which will see vastly improved journey times and road safety for drivers, our Project Manager for the M6, John McDonagh, is impressed with the teamwork seen from all parties throughout the two year delivery in order to reopen this crucial stretch of motorway on time.

“We forged a brilliant relationship with the teams from Balfour Beatty and Vinci while working on the M6, with all three coming together magnificently in order to deliver a major upgrade project for Highways England,”

“The upgrades we’ve seen here and across a number of other projects are vital if we want to future proof our motorway infrastructure and ensure that they continue to be  a safe and user-friendly place to travel. These works will significantly improve journey times and road safety for drivers in the region on what is a heavily populated route and we’re proud to have been an integral part of its delivery.”

Speaking about the collaboration, Richard Turnbull, Project Director BBVJV, said “It is crucial for teams to work together and McCann’s collaborative approach helped to enable the scheme to deliver a successful project, overcoming the challenges of upgrading the existing asset to Smart Motorway.” 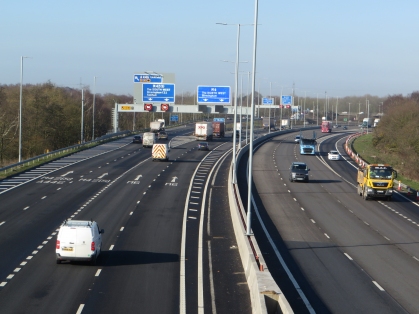