A series of projects that our team is involved in, as part of Highways England’s Area 10 Asset Delivery Framework, are on track and generating positive feedback from the Client following the recent end-of-year-one progress report.

Highways England’s Area 10 Construction Works Framework (CWF) Contract was first put out for tender in 2018 and covers Cheshire, Merseyside, Greater Manchester and Lancashire in the north west of England.  Works commenced in April 2019 with our team named as a CWF Contractor on a 4-year Framework with construction works totalling up to 270m.

Year one, which came to a close at the end of March this year, saw us work across a number of significant projects for Highways England, including:

– Installation of 96 sets of loops on 24 schemes between April 2019 and March 2020 in collaboration with Crown Highways.

– The installation of 21 subway luminaires with associated infrastructure and electrical works.

– The installation of 20 lighting columns, as well as the acceleration of 11 lighting columns in the final weeks of the year to achieve the client’s year one programmed outputs.

– The installation of 21 lighting columns in March 2020 in collaboration with other CWF Contractors and Amey Maintenance & Response to accelerate the scheme and achieve the client’s year one programmed outputs.

– The installation of 8no 2×12 motorway message signs  including the associated infrastructure and cabling.

– The installation of 6no 3×18 motorway message signs including the associated infrastructure and cabling.

As detailed, the majority of these works were carried out in the final three months of the financial year due to contract mobilisation, design and procurement periods in order to meet Area 10 and National Highways England Asset Delivery Contract outputs.

In order to fulfil these projects, strong collaboration was required between our team and a number of partner organisations. From pre-design services and early contractor involvement, to design surveys and the delivery of works, we successfully worked in close partnership with Highways England’s designers (Amey Consulting), other CWF contractors such as Crown Highways and the Area 10 Highways England Team in order to hit tight deadlines safely and within allotted budgets.

Relationships were formed very quickly across the first six months in order to drive success and the approach taken for all of the works demonstrates the excellent results that can be achieved through a strong collaborative approach.

Year two is now underway and Highways England’s Programme Delivery Manager, John Lyssejko, is keen to maintain momentum following the significant steps already made and has passed on his praise to our team for its efforts in the first 12 months.

“All of our delivery partners play a vital role within how we deliver Asset Delivery Frameworks such as Area 10,” says John.

“We rely on everyone’s professionalism, efficiency and collaboration in order to successfully deliver projects both on time and within budget – and these skills have been demonstrated to a high level by McCann and their partners throughout year one,”

“The McCann team continues to go the extra mile, assisting both myself and my team while consistently displaying best practices in terms of the support, spirit and the collaborative approach needed for Asset Delivery contracts. This standard is one for others to follow and we very much look forward to working with McCann throughout year two and beyond.”

Highways England’s Site Supervisor for the M60/M62 scheme, Shaun Edwards, was also full of praise for our team and commended the efforts of everyone on site in ensuring successful delivery.

“I can honestly say that it has been a genuine pleasure working with McCann’s Project Supervisor Barrie Bridge and the rest of the team on the M60/M62 scheme. Challenges have been overcome thanks to the team’s knowledge and knowhow and everyone has maintained constant communication with me every step of the way in terms of how they have reached successful solutions,”

“Everyone deserves a huge pat on the back for a job well done. It was a pleasure to supervise them and I would happily work with Barrie and the team again on any future projects!”

Following the feedback from both Shaun and John at Highways England, Andy Bates, Contracts Manager for McCann, said, “It means a lot to me and the teams on site when we receive this kind of feedback because it shows that we’re on track and doing things the right way,”

“Me, my management team and the lads on site pride ourselves on being able to effectively work with others and either meet or exceed client expectations – no matter what the project. We’re delighted to be continuing with Highways England in Area 10 on the back of such a positive start and look forward to another successful and productive year ahead.” 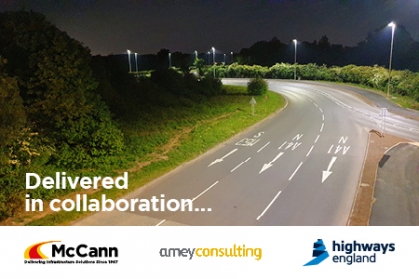