We are proud to announce that the annual Padraic Sweeney Kidney Research Golf Day, sponsored by McCann, was recently held at Ruddington Park Golf Club and successfully raised £7,000 in support of Nottingham’s City Hospital and Queens Medical Centre.

The event took place on Sunday 28th May with 50 teams taking part – all competing for the prestigious annual charity competition run by the Nottingham Irish Golf Society.

We sponsored a range of prizes for the tournament and have done since its formation 22 years ago by Padraic Sweeney – who was a close friend of Willie Tunney – uncle to MD John McCann. Since then, the Irish Society has, along with McCann, raised over £200,000 in crucial funds to help stock the Padraic Sweeney Laboratory in Nottingham City Hospital as well as supply the Renal Units at both the City Hospital and the Queens Medical Centre with important funds for research projects.

These organisations are not the only ones supporting Padraic’s fund – last year a local bike rider Mick Ives cycled the 2,800 mile route of the Giro di Italy, raising £918 towards the cause.

Event chairman Willie Tunney was delighted with the turnout for the 2018 event and hailed another successful year in support of two worthy local hospitals – “We’re proud to have supported both the City Hospital and the QMC for so long – raising life-changing amounts over the past 22 years,” said Willie.

“The continued support from McCann every year is fantastic and we value the company’s support for the competition since it was first named as main sponsor back in 1996,”.

“We would also like to extend a special thank you and show our appreciation to East Midlands Diamond Drilling, Marshall Industrial, Brown Bevan, A K Trenchless, CID Group, Signpost Solutions, UK Diamond Drilling and Charles Endirect who have also supported us this year.”

The local team from Ruddington Grange Golf Club were the overall winners of this year’s tournament after beating another local team of Phil Rainbow, Adam Hughes, Steve Sanders and Paul Russell on a countback after both teams finished with 82 points.

The sponsors’ prize went to the four ball team from Civil and Lintels with 75 points and the prize for the best society score was won by Andy Nally, Steve Ireland, K Barrie and M Austin with a score of 93 points.

Nearest the pin prizes were won by Scott Budding and Ian Sallis while the putting competition was won by McCann Director Adrian Cronin.

Willie added, “All funds raised will go straight to their respective causes and on their behalf I would again like to extend a heartfelt thank you to everyone that took part this year and we look forward to welcoming everyone back for 2019’s golf day!” 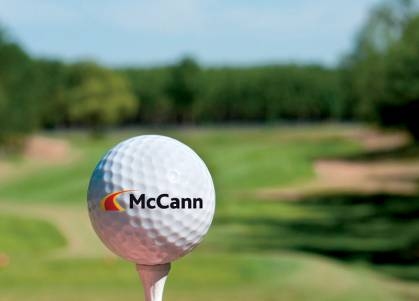