Double stroke survivor on the road to recovery

John suffered a suspected transient ischemic attack (TIA) in June 2017 and a second attack in June 2018 when he was rushed to Nottingham’s Queen’s Medical Centre for further treatment.

John was signed off work for a month after the second TIA when he noticed a deterioration to his eyesight. As an employee, he was able to speak to a consultant at Nuffield Health Hospital in Leicester where he was recommended to a vascular consultant for a scan of his aorta in December 2018. Scans revealed a 6cm aneurysm of his aorta and John subsequently underwent 11 hours of open-heart surgery in February of this year before being placed into an induced coma for 5 days following the procedure. He also suffered a collapsed lung while in hospital.

Throughout all of these setbacks, John has tried to push forward on the road to recovery but has seen his mental health and confidence suffer as a result. He’s now hoping that this time, he can finally put everything behind him.

“As you can imagine, it’s been an incredibly tough few years with setback after setback,” says John.

“This has all had a knock-on effect to my mental health, leaving me with anxiety and taking me from a confident guy, to someone that’s had his confidence shattered,”

“My rehabilitation is going very well since my heart surgery. I’m attending regular group rehab sessions at Glenfield Hospital, working through topics such as health, wellbeing and medication. We’re also encouraged to exercise regularly to help build up our mental and physical strength as well as cognition, which can be severely affected following a TIA.”

John is the first person to admit that his recovery and ability to turn a negative situation into a positive could not have been achieved without the unwavering support of his colleagues and in particular, our Managing Director, John McCann. Indeed, without access to the company’s private medical insurance, his story could have been very different.

“McCann has been a dream employer throughout everything, going against the often less than positive stereotypes people have of the construction industry. Whenever you’re off work, even with the flu, you worry what people might think and sometimes you force yourself back early. The team at McCann has been fantastic and John McCann in particular, has been the epitome of understanding,”

“There’s no pressure to return early and he offered private counselling sessions prior to and following my operation in order to build my confidence back up – which means everything,”

“Everyone has mucked in to cover my role while I’ve been away, and the company has placed me on a phased return schedule. All being well, I can now increase my hours slowly before eventually taking on all my previous responsibilities again,”

John is overwhelmed with the support he’s received and has nothing but praise for everyone that’s been beside him every step of the way – including the medical staff that worked with him following both attacks.

“I will be eternally grateful to John McCann and the whole McCann family for sticking by me. Their understanding has made my recovery process easier by removing any unnecessary stress – I really can’t thank them enough.”

John McCann has seen first hand the effects on both John’s confidence and health, and says the wellbeing of his staff always comes first.

“The health of our team is always the priority and if anyone requires time away or additional support inside or outside of work, then we’re right behind them,” says John.

“To go through what John’s been through is incredibly tough and when he came to me, I wanted him to take as much time as he needed in order to come back at his best,”

“John is such a happy-go-lucky character – so the effect on him has been noticeable. He appears to be making a strong recovery and everyone at McCann wishes him the very best. It’s great to see him around the office again with his infectious enthusiasm and sense of humour!” 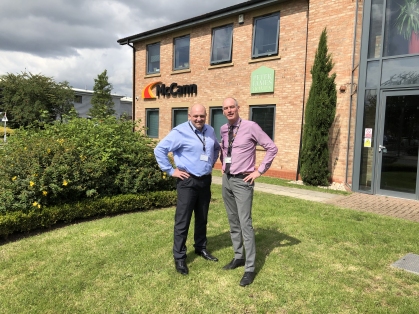