We have been recognised for our involvement in the improvement scheme on the M1, Junction 19 – as the site wins the ‘Construction News Project of the Year’ Award.

The ‘Construction News Project of the Year Award’ is open to projects which require an outlay of over £50m, and we have been recognised for our involvement, alongside principal contractor Skanska Civil Engineering, on behalf of Highways England.

As part of the significant improvements on the junction, we were integral in the delivery of all new signage, lighting and communication systems, to make driving on this section of road safer for road users.

The project has now received a hattrick of awards in recent months, picking up the top prize in the ‘Major Project of the Year’ category at the Chartered Institute of Highways and Transportation awards in June, followed by the ‘Project of the Year’ award at the 2017 Skanska Awards ceremony in early July. The cherry on the cake is the addition of the Construction News Project of the Year award, which was presented to the team last month.

For our Project Manager on the M1 Junction 19 project, John Harte, this was his first scheme as Project Manager since promotion into the role  – and he is delighted with the recognition by Construction News for the work carried out – “As part of an outstanding team at McCann, naturally I want to do a great job and ensure our projects are hitting the highest standards – so to receive all this recognition on my first project as a Project Manager for the company is beyond anything I could have hoped for,” said John.

As well as the three awards received for the work on M1 Junction 19, our on-site team has also received significant praise throughout the project for its commitment to safety and collaboration on the scheme. This follows the recent win of a RoSPA Gold Award for the company in July – the second consecutive year we have been awarded the honour by the Royal Society for the Prevention of Accidents for our overarching occupational health and safety management systems.

John added, “To be part of the wider contracted team that has secured several awards for a single project is a fantastic achievement. It is a great benchmark for myself and the company on future projects and we will continue to work to these standards going forward”.

To read more about ouraward wins, as well as news and updates on all other current and future projects, visit www.mccann-ltd.co.uk 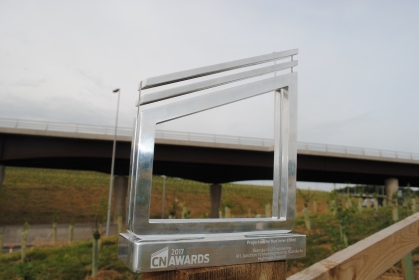