Skip to content
Media > Awards > Quick thinking in the workplace earns Nigel Hallam the employee of the month award for May!

Quick thinking in the workplace earns Nigel Hallam the employee of the month award for May!

We are delighted to announce that company employee Nigel Hallam has been awarded the McCann employee of the month award for May after demonstrating bravery and quick thinking in the workplace when dealing with a serious road traffic accident.

Nigel and his team – consisting of co-workers Ashley Hallam and Dave Ellis – were recently working on the M1 as part of our installation of smart motorway infrastructure on the 7.5 mile stretch between junctions 23a – 25.

A serious road traffic accident occurred off-site involving a lorry shedding its load – which subsequently hit a van travelling along the carriageway. The driver of the van was seriously injured in the incident and required immediate assistance for the injuries he sustained.

Nigel and his team acted promptly, with Nigel administering first aid to the van driver until the air ambulance crew arrived at the scene. The team then continued to provide assistance until the emergency services were in a position to take the driver away to the nearest hospital for further treatment.

Following the incident, the on-site air ambulance crew praised Nigel for his quick thinking and the level of first aid he administered to the injured driver.

Speaking about the incident, Nigel said, “In that situation, you don’t think about what’s happened, you just react and do whatever you can for the person in trouble,”.

He continued, “I knew the driver was in a bad way, so while we waited for the air ambulance to arrive on the scene it was imperative he received assistance in order to ensure that he was in the best situation possible. I am just pleased that I was able to put my first aid training to good use and help him after what was a very serious RTC.”

Nigel, Ashley and Dave all received Green Card awards for their courageous act as well as a £10 Tesco gift voucher from the sites Principle Contractor, Costain Galliford Try Joint Venture.

Nigel also received the J McCann Employee of the month award and £50 worth of highstreet shopping vouchers.
From everyone at McCann, we would like to pass on our sincere thanks to Nigel, Ashley and Dave for their swift actions and we wish the van driver a very speedy recovery from his injuries. 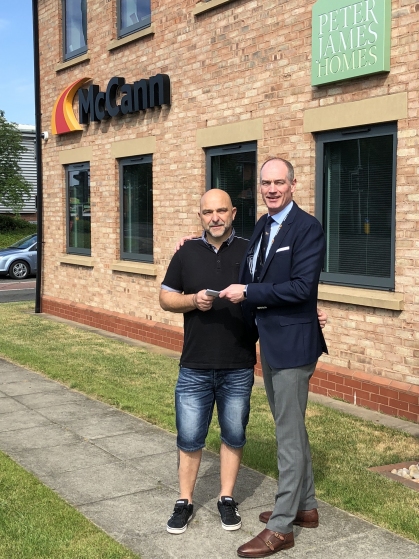