Two McCann operatives working across National Highways’ Area 10 Asset Delivery Framework have been recognised with a McCann Mental Wellbeing award after their quick thinking and bravery saved a life.

Stuart Corless and Alan Cooper are both working on message sign renewal works within Area 10 and spotted an incident involving a young girl and two police officers on a bridge over the M602 as they were driving their vehicle to a local site in Eccles, Greater Manchester, on Thursday 14th October.

As Stuart and Alan drew closer, they noticed that the girl was attempting to jump from the bridge and the officers were struggling to contain her. Quickly realising the seriousness of the incident that was unfolding in front of them, Stuart and Alan stopped their vehicle and ran over to assist the officers. Together, they successfully lifted the girl to safety away from the edge of the bridge – allowing the officers to provide her with the necessary care and assistance she needed.

Speaking after the incident, Stuart recollects the moment himself and Alan realised what was happening on the bridge and the speed with which the whole situation unfolded.

“When something as serious as this is playing out in front of your eyes, you can’t quite believe what you’re seeing to begin with,” explains Stuart.

“We saw the struggle and it was clear that the girl was attempting to jump. You don’t have time to think about what to do in that situation, you just do what you need to do,” he adds. “Myself and Alan stopped the vehicle and ran over with the thought that we had to do whatever we could to save this person’s life. We’re just thankful we got there in time and we hope the girl is now safe and well and receiving the support she needs.”

Stuart and Alan have both received the new McCann Mental Wellbeing award – which has been introduced to acknowledge positive behaviours around supporting mental wellbeing – and it is the first time this award has been presented. They have also been offered mental wellbeing support through McCann’s Employee Assistance Programme.

Gary Knowles, Head of Scheme Delivery for North West Operations at National Highways, has commended Stuart and Alan’s actions while recognising the wider impact had the incident not been avoided.

“Both Operatives averted a terrible situation from getting much worse and in doing so, protected the lady in question, her family, and of course the travelling public who could also have been affected.”

Gary’s sentiment is supported by National Highways’ Construction Assurance Manager Sam Kenwright who added, “Mental health is a serious issue that in this instance they prevented from costing a life. I hope that the lady can now get help from the correct people.”

Barrie Bridge, Project Supervisor for McCann, is delighted with the quick thinking and selfless actions of his Operatives and can’t praise them enough for how they responded.

“Operatives can be trained for certain situations or made aware of the risks and dangers on site, but when it comes to responding in the moment to something as serious as a suicide attempt, nothing prepares you fully for how to react,”

“I’m incredibly proud of both Stuart and Alan for how quickly they responded and for the way they managed to support the emergency services in assisting with a difficult situation under intense pressure,”

“Both are a shining example of the fact that our people care not just about their own safety or the safety and wellbeing of those they work alongside, but also the general public. Stuart and Alan are thoroughly deserving of their Mental Wellbeing awards and we can’t thank them enough for their bravery and speed of thought in saving the young girl’s life.” 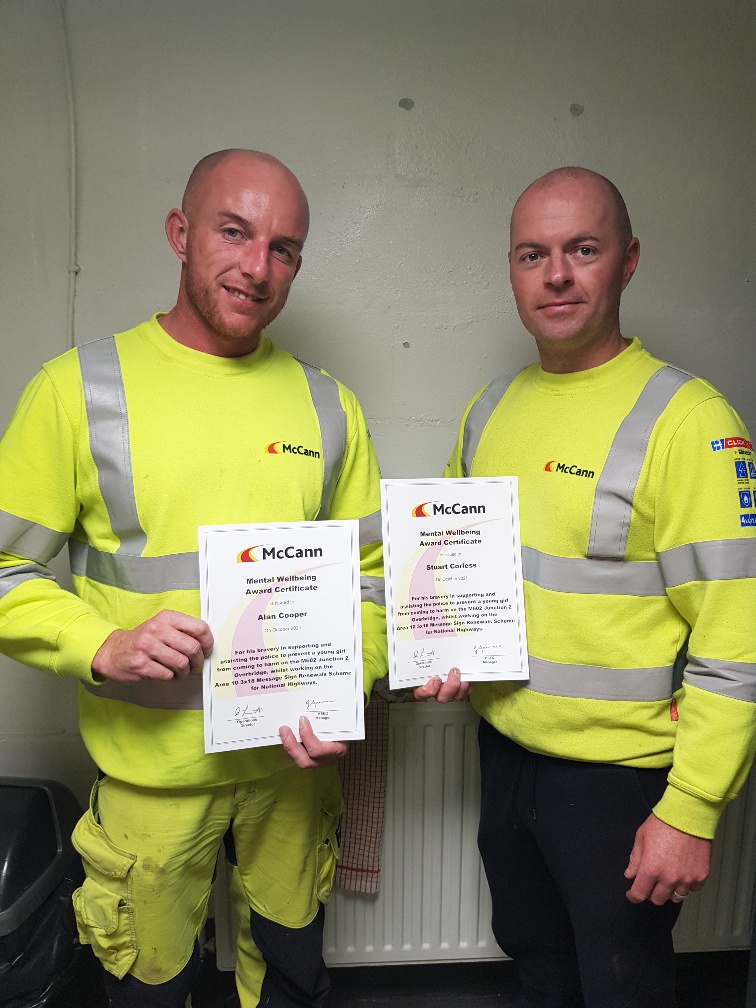