Our team has been awarded two consecutive supplier of the month awards by Balfour Beatty Vinci Joint Ventures (BBVJV) for work on the M6 J2-J4 smart motorway scheme.

The supplier of the month award recognises the top performing supplier across a single project on a monthly basis. Points are awarded based on the ability to meet set criteria including observations raised, innovating working practices, site safety inspections, vehicle checks, use of personal protective equipment (PPE) and induction scoring.

BBVJV awarded our team with both the January and February supplier of the month awards after we achieved the highest overall supplier score across all of the individual criteria whilst working on the M6 J2-J4 smart motorway scheme.

Work on the M6 is one of the latest smart motorway schemes to be implemented across the UK, using active traffic management (ATM) techniques to increase capacity and improve safety on the country’s motorways through the use of variable speed limits and the hard shoulder at busy times. As part of the wider project, we are responsible for delivering smart motorway communications as well as street lighting and traffic signs – all crucial elements within the new layout.

John Harte, our Project Manager on site, is delighted to see his team take home the award and is proud of the continuous high standards achieved since the project began.

“The team has been amazing and although I’m more than aware of what they’re capable of, they still continue to exceed all of my expectations!” said John.

“They’ve successfully worked to and delivered a section of the project to a new deadline – three months earlier than originally anticipated. Coupled with several challenges along the way, this has made the team’s feat all the more impressive,”

“It’s been a fantastic effort by the McCann team and BBVJV, demonstrating the importance of close collaboration in order to achieve successful outcomes.”

To find out more about our portfolio of projects, visit www.mccann-ltd.co.uk. 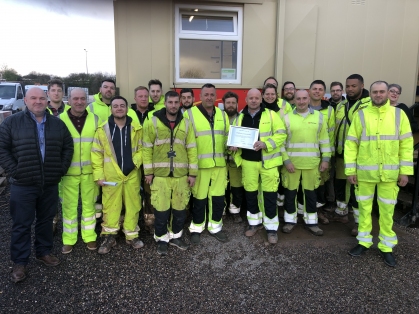