We have been commended by Balfour Beatty and Vinci Joint Ventures (BBVJV) for our compliance with HSEQ regulations as part of our work on the M6 J2-4 project for the month of May.

The team working on the M6 J2-4 project was presented with the award by BBVJV after excelling in its performance and demonstrating a clear commitment to health, safety, environment and quality (HSEQ) during the month of May.

HSEQ points are awarded to contractors on infrastructure projects in relation to specific criteria. If the threshold of 220 points is surpassed, companies qualify for an award in recognition of their work. We successfully hit 260 points within the scoring criteria in May, with areas covered as part of the judging process including safe progress on the job site and continuous daily meeting input, as well as the the creation of observation cards to prevent potential incidents and the correct reporting of issues to BBVJV.

We were specifically commended for two individual incidents which our on-site team acted on promptly during the month.

The first involved the reporting and safe removal of two great crested Newts from an existing chamber under the supervision of the site environmental advisor by McCann employee, Kevin Ivers.

The second was the safe removal of a mother duck and her three ducklings from the hard shoulder as they approached a works entrance. After reporting the appearance of the ducks on-site, McCann employee Steve McKeown orchestrated the safe guidance of the animals to a nearby canal – ushering them away from danger and avoiding a potential incident with traffic on the carriageway.

For Project Manager John Harte, securing this award from BBVJV is a great honour and testament to the high standards set not only across his on-site team, but the company as a whole; “We always aim to be the best in everything we do – with quality and health and safety at the heart of our work ethic day in, day out,”.

He continued, “I would like to extend my personal congratulations to Kevin, Steve and the team for their dedication, hard work and appreciation for SHEQ requirements and responsibilities on site. We will look to continue these high standards going forward as a benchmark for both this and future projects.” 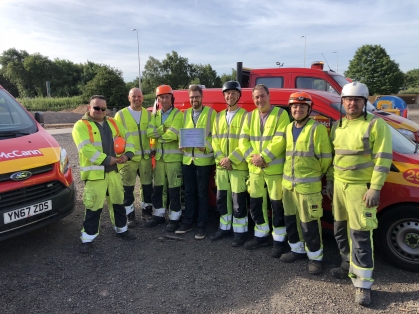